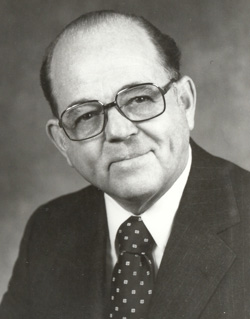 Dr. Roy L. Whistler was born on March 31, 1912, in Tiffin, Ohio, where he grew up. He attended Heidelberg College (BS), The Ohio State University (MS), and Iowa State University (Ph.D.). He began his professional career at the US National Bureau of Standards (1938-40), then became Head of the Starch Structure Group of the USDA Northern Regional Research Laboratory at Peoria, Ill., (1940-45), before coming to Purdue University.

Professor Whistler contributed to many aspects of carbohydrate chemistry, but was best known for pioneering research on polymeric carbohydrates known as polysaccharides, and for promoting their industrial applications. For example, he foresaw the industrial potential of the guar plant, promoted it as a new commercial crop, determined the structure of the main constituent of guar gum, and was instrumental in the development of the guar gum industry. He also perceived the industrial potential of starch amylose and with Purdue Professor H.H. Kramer, a corn geneticist, developed the first high-amylose corn, now also a valuable commercial crop. He was a leading consultant to the corn-starch industry during its major development period, the post-war WWII years. He chaired the Crop Utilization Committee of Purdue’s Agriculture Experiment Station in the 1950s and for 16 years its Institute for Agricultural Utilization Research.

In the business arena, Professor Whistler was a consultant to 20 companies on a long-term basis and a director of 11 companies, serving as chairman of the board of several, including US Air.

Professor Whistler wrote the first complete book on “Polysaccharide Chemistry” (1953) and provided investigators a source of “Methods in Carbohydrate Chemistry” with the establishment and editing of this series. He also established and edited a treatise on “Industrial Gums” and one on “Starch: Chemistry and Technology.”

A major international award, the Roy L. Whistler Award of the International Carbohydrate Organization ($10,000 prize) is named to honor him. The premier carbohydrate research center, the Whistler Center for Carbohydrate Research at Purdue University, is also named in honor of him.

Professor James BeMiller, the founder and former Director of the Whistler Center for Carbohydrate Research, says of him, “Professor Whistler was a man and a scientist of unique stature. For almost 50 years, he was a pioneer and a leader in carbohydrate research and applications. He promoted cooperation and friendship among carbohydrate researchers around the world. He bridged academic science and industry and was held with esteem and admiration by all who knew him. For decades, Professor Whistler was the dominant force in carbohydrate chemistry in the world, a leader in the field of industrial utilization of carbohydrates in both the academic and business communities, a compiler of the carbohydrate literature, and a unifier of the international carbohydrate community. His name is synonymous with the chemistry and utilization of polysaccharides.”

Dr. Whistler was an outdoorsman and a lover of wildlife. He made numerous trips to such places as Africa, South America, Hudson Bay, Antarctica, and the foothills of the Himalayas to observe nature. In 1997, he founded the Roy Whistler Foundation to promote and support the preservation of natural land and wildlife, primarily in Tippecanoe and surrounding counties.

Dr. Whistler was also a lover of intercollegiate athletics and chaired the Athletic Committee of the University Senate and was the Faculty Representative to the Big Ten Conference (1966-1977).

The Foundation is established and dedicated primarily to the protection and preservation of nature and wildlife in the State of Indiana. This activity encompasses the use of its funds to directly or indirectly acquire, purchase, control, maintain and protect present or future wildlife areas whether wet or dry.